Objective: HAEMANGIOPERICYTOMA (HPC) has been described as a variant of angiosarcoma (hemangioendothelioma) with relatively benign biological aggressiveness. It can develop anywhere there are capillaries; hence, it causes many unique problems of diagnosis and therapy. HPC is an uncommon mesenchymal neoplasm. It is believed to arise from the pericytes, contractile spindle cells that surround the capillaries and post-capillary venules. HPC immunohistochemical profile is uncertain and diagnosis is usually controversial. Differential diagnosis from synovial sarcoma, mesenchymal chondrosarcoma, fibrous histiocytoma, and solitary fibrous tumor is a medical challenge. We present an unusual case of histopathologically confirmed malignant haemangiopericytoma of the left thigh. HPC is rare tumour of adult life (fifth decade) and is uncommon in children, paediatric HPC account for less than 10 % of all cases, and less than 3% of all soft tissue sarcomas.
Key Words: Haemangiopericytoma, Rare Case, Thigh

Introduction
Haemangiopericytoma is an uncommon mesenchymal neoplasm that was first described and named by Stout and Murray in 1942 1, however it was not until 1949, when Stout 2 reported 25 additional cases, that the tumour received widespread recognition. It may occur at any anatomical site.
The tumor may develop wherever capillaries are present. Haemangiopericytoma is believed to arise from the pericytes, contractile spindle cells that surround the capillaries and post-capillary venules [1]. The tumour typically comprises uniform elongated cells surrounding a rich, branching network of thin-walled vessels of various sizes and shapes [3]. However, there are difficulties in the histological diagnosis of haemangiopericytoma because other soft tissue neoplasms may have areas of rich “haemangiopericytoma-like” vascularity. It occurs commonly in fourth to fifth decade of life and shows no sex predilection [4].
There are published reports of hemangiopericytomas occurring in the thoracic cavity [5], head and neck area [6], genitourinary tract, 7 peritoneal cavitv,8 retroperitoneum, the soft tissues of trunk and extremities,9 and the thoracic spine [10].

Case Report
A 45-year female patient first presented to the orthopaedic out patient department with a chief complains of pain and swelling in left thigh since 1 year. Pain preceded the swelling, swelling was progressively increasing in size, and pain was dull aching in nature (Figure 1).
The mass in the left thigh had increased tremendously in size over the past 2-3 months. On clinical examination, the mass was firm and tender, not attached to the overlying skin and was not mobile. It was neither pulsatile nor warm to touch. The chest was clinically clear and the review of other systems was essentially normal. The plain radiographs of the pelvis with left femoral bone showed a huge soft tissue mass on the upper third of the left thigh with osteolytic destruction of the proximal third of the left femur and the femoral head (Figure 2). Amorphous calcification was also seen within the mass lesion.
Patient also gave history of fall sustaining injury to left hip 5 years back, h/o massage for 15 days. A USG guided FNAC was suggestive of haemangiopericytoma. MRI of the swelling was also done and reported as well defined heterogeneous singal intensity mass in the anteromedial aspect of left thigh with areas of calcification suggestive of hemangioperiytoma (Figure 3). An open biopsy was suggestive of vascular tumour, Haemangiopericytoma; it was also suggestive of low-grade spindle cell sarcoma with lobularity, vague epitheleal areas and calcification suggestive of spindle sarcoma. The heart and bony thorax were within normal limits. Abdominal ultrasound done was normal. Doppler ultrasound, Computerized Tomography (CT) and angiography were done as the next investigation protocol since the patient complained of pain in abdomen. On CT scan 1.6 x 1.8 cm hemangioma in segment IV of liver was seen, suggestive of metastasis.
Pathological Features:
Grossly, the tissue may be firm, traversed by coarse trabeculae of fibrous tissue, interrupted by areas of hemorrhage or necrosis, only constant factor may be the profuse proliferation of capillaries surrounded by connective tissue sheaths of various thicknesses outside of which are the characteristic cells – Zimmerman’s pericytes. The conventional hematoxylin and eosin stain, with differentiation facilitated by silver reticulin stain, gives histologic confirmation.

Treatment
Complete surgical resection remains the mainstay treatment. In Espat’s report, patients undergoing complete tumor resection showed a 100% survival rate at five years (Espat et al 2002). However, considering the favorable outcome in this disease, some authors caution against operations that may potentially cause loss of function or are limb threatening. Preoperative ligation of afferent vessels or vacular embolization might help reduce the menace of operative hemorrhage (Pandey et al 1997). Both chemotherapy and radiotherapy seem effective and are recommended in all patients with incomplete resection and /or large, locally invasive tumors.in our case the patient was managed with complete resection of tumour, the tissue was sent for histopathology and confirmed as hemangiopericytoma.

Discussion
Hemangiopericytoma is a relatively uncommon tumor. HPC is a rare tumor of adult life (fifth decade) and is uncommon in children. Pediatric cases account for less than 10% of all HPC (Enzinger and Smith 1976) 11 and approximately 3% of all soft tissue sarcomas in this age group. In 1969, Backwinkel12 collected 224 cases from the literature, which had had adequate follow-up. Stout and Murray13 introduced this entity in 1942 to distinguish this puzzling tumor of blood vessel origin from a closely related benign lesion, the glomus tumor and from other kinds of angiosarcomas. The hemangiopericytoma is composed of proliferating capillaries and spindle shaped cells resembling the pericytes of Zimmerman.14 Stout considered pericytes to be the principal cell type in both tumors. The origin, structure, and function of pericytes is a controversial subject. These cells are normally present around capillaries and considered to be a specific type of cell closely related to smooth muscle cells, but without contractile fibers.
Haemangiopericytoma accounts for less than 2% of soft tissue sarcomas. It may occur at any age but is most common in the fifth and sixth decades. Haemangiopericytoma generally presents as a painless mass, but pressure on adjacent viscera may cause symptoms, and local recurrence implies a poor prognosis. Various paraneoplastic syndromes have been described in association with haemangiopericytoma, including hypoglycaemia [15], [16], hypophosphataemic osteomalacia [17],
Haemangiopericytoma is a highly vascular tumour and occasionally may cause clinically significant arteriovenous shunting. Haemangiopericytoma must be distinguished from the more common sarcomas such as malignant fibrous histiocytoma and liposarcoma, especially when occurring in the thigh. As already mentioned, these commoner tumours and others may be confusing as they contain areas of rich haemangiopericytoma-like vascularity. Haemangiopericytoma should be considered in the differential diagnosis of hypervascular soft tissue masses arising in the retroperitoneum, pelvis or lower extremity. The reported frequency of calcification on CT in haemangiopericytoma varies from 0.94%-71.4% 4, 9. Amorphous calcification was seen in this patient. Bone erosion, which was also seen in this patient, has been reported before in one of the 106 cases of Enzinger and Smith 1; seven of the 60 cases described by McMaster et al had similar bone erosion. 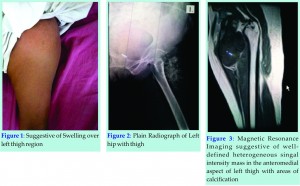 Our case is of Haemangiopericytoma and not Solitary fibrous tumour or Fibrous histiocytoma, synovial sarcoma or mesenchymal chondrosarcoma, which are considered differential diagnosis oh Haemangiopericytoma. However all tumours diagnosed as haemangiopericytoma should be histologically reviewed.
As benign glomus tumors may occur wherever arteriovenous anastomosis are present. Glomus cell development occurs in the postnatal period and disarrangements in this process may result in a range of lesions with various degrees of vascular and cellular components. They are usually less than 5 mm in diameter28 and characteristically present with severe paroxysmal pain triggered by touch or change in temperature. The multiple painful glomus tumors have identical histologic features, primarily cellular and are usually localized to a circumscribed area of the body. The solitary and multiple painful glomus tumors (some classify as hamartomas) may occur in deeper tissue structures including the viscera [18]. The multiple painless group may be widely distributed N with dozens of lesions and their histological appearance is more vascular.
Hemangiopericytoma is a slow growing, but malignant tumor with a capacity for local invasion and spread through the bloodstream. There is no single histologic criterion which will reliably differentiate the malignant from the benign hemangiopericytoma.'” ROBERT E. GERNER in his study observed out of 13 patients, 54% were classified as malignant because of metastasis during their clinical course. A high recurrence rate results when simple enucleation or excision is performed on the basis that the tumor appears to be encapsulated. Wide excision, which may include amputation in selected cases, is the treatment of choice. Metastatic lesions, particularly in the lung, should be evaluated and resected whenever feasible. Radiation therapy may convert a non-resectable lesion into a resectable one and provide significant palliation.

Journal of Orthopaedics and Rehabilitation Details